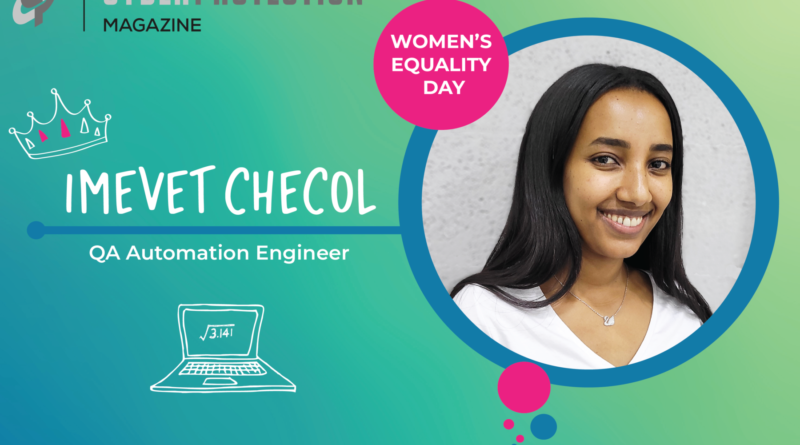 Women’s Equality Day celebrates the passage of the 19th Amendment that gave women the right to vote on August 26, 1920. it wasn’t, however until the US federal legislation that prohibits voting rights based on racial discrimination (also called the Voting Rights Act which was passed on 1965) that removed the long-lasting prevention of many African American women and other women of color from being able to participate in the game of democracy. Unfortunately, even in 2022, there are still many hurdles for all women, in the states, and around the world from exercising this basic right.

Today in honor of Women’s Equality around the world, we are thrilled to put a spotlight on the amazing story of Imevet Checol, who works at Odix; From a curious little kid that doesn’t know the language in a strange country, against all odds climb her way to the top of the Israeli cybersecurity technology sector by believing in herself and with the help of fellow women. This is her story, this is her mentor’s story. Imevet, you are a source of inspiration for young girls around the world.

Born in the countryside of Ethiopia, seven-year-old Imevet had to face her first challenge, getting along in a foreign country and struggling to learn the local language.

Imevet, who first arrived at an Israeli Kibbutz just next to the Lebanese border started her journey in a public local school without knowing a single word of Hebrew. Luckily her first-grade teacher, Shosh, saw something in her character and decided to teach her after school her Hebrew was fluent.

Two years later, Imevet and her family left the Kibutz and moved to “Rishon LeTsiyon” a major city in the center of Israel, and joined a religious school. Four years later and Imevet got another opportunity that changed her life.  While most kids of the Ethiopian community went to a dedicated junior high, her school teacher saw her potential and encouraged her to a different prestige high school in the city, that specialized in science and new technologies. Imevet took chemistry and mathematics as major topics and graduated with honors. It was only at the age of 15 that Imevet was exposed to computers for the first time, an event that change her life. “My first interaction with computers was in a Photoshop class when they brought us pictures of models and asked us to retouch the image and remove all of their zits and acne-related pimples from their skin. It was a shocking experience because I never touched a computer, nor saw ladies dressed that way”. After graduating from school, she had to make a choice, recruiting to the army, or, as a religious lady, donating to the civilian community.

Fortunately, luck was on Imevet’s side again, with little encouragement from friends she decided to join the army, her decision was followed by a phone call from an organization that helps outstanding graduates of the Ethiopian community to penetrate high-level positions in the army, that normally would only be acquired by candidates with a solid background. They convinced her to come to an introduction meeting  Where she heard for the first time about opportunities for a technology-based career in the army, including a job as a QA tester. Those who are accepted into the program, receive a tailored-made course during their service that will teach them everything they have to know from A to Z. “While I was quite apprehensive about even showing up, that meeting changed the course of my life. That was the moment I’ve decided to fight to the death so I can get this role”. When she came to register no one at that place had data of Imevet. She told them that she was a good student but without any computer background. “When I’ve done the QA course in the army, I started to realize the power of computers. I understood that it’s not just clicking some buttons. It was like mathematics that you need to cleverly enough figure out the best and most efficient path to achieve your goals, and this is something I was passionate about and want to pursue as a life career”.  After an intensive 4 months course, with a 40% of dropout rate. Imevet has proven to be worthy and started her professional path at the luxurious IDF’s IT unit, Mamram. During that time, Imevet specialized in SAP HR and CRM systems, an ALM tools, conducted various performance tests for new systems for the military courts, the inventory, and logistics systems, and even got her QA certification of ISTQB.

When Imevet was discharged from her mandatory service, she worked for two years for one of Israel’s biggest insurance companies as a QA tester, saving enough money before stepping back and pursuing her journey for excellency. She enrolled for academic studies in computer science so she can be proven herself not only as a great QA tester but also as a gifted software developer. During her second year of studies, Imevet embarks on two significant milestones; she won a scholarship for leading women from the “Israeli Hope” governmental fund and also started a student position at odix as a  QA tester. After graduating from the university, Imevet was promoted to a full-time position at odix and also started to handle QA automation, a position that requires code writing.

It is no wonder that Imevet in Ethiopian means a queen. Today, Imevet spends her time between work, the gym (train 3 times a week), and mentoring promising students from her old community in the same program she was once part of. “I am so fortunate for the women and men that surrounded me at the crucial crossroads during my life, guiding me on the correct path. My motto in life is “Success is over there, start walking”.